It is incredible how you can be oblivious to the beauty on your very doorstep. Up until February I hardly knew Gotts Park which is only about ten minute walk away from my house . I remember going there one misty autumn morning in search of some moody photographs, and that's about the only time I actually ventured into the park. Now, four months later, I have been there countless times walking in all directions with my new puppy, and I can say I have fallen in love with the place. There is a lovely feel about it; it is big enough for me not to get bored frequenting it a few times a week; and there is more than enough interest for my photography, too. It is very rare that I don't get inspired to reach for my camera phone to take a pic on any visit.
The pics below were taken earlier this month around eight o'clock in the evening and are some of my favourite ones taken so far this year. 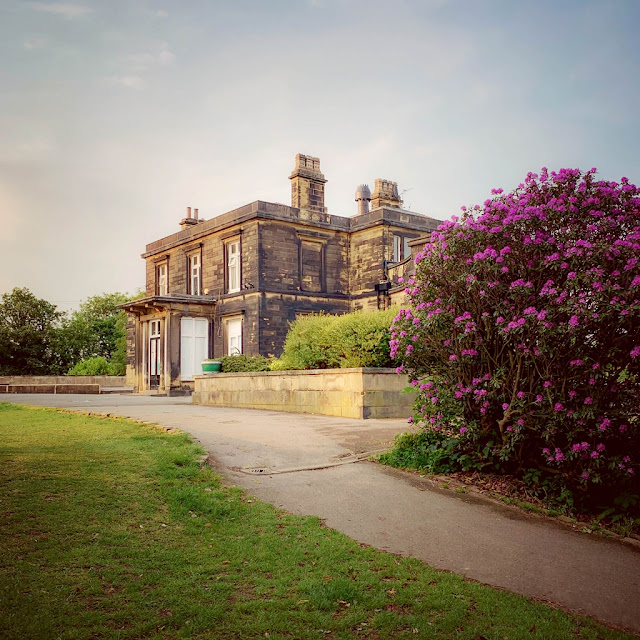 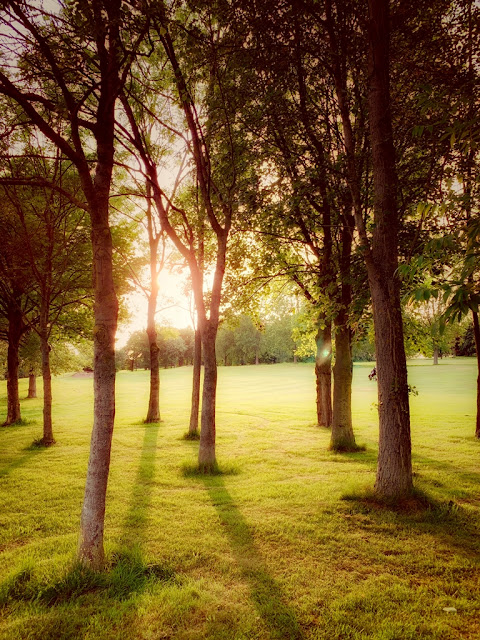 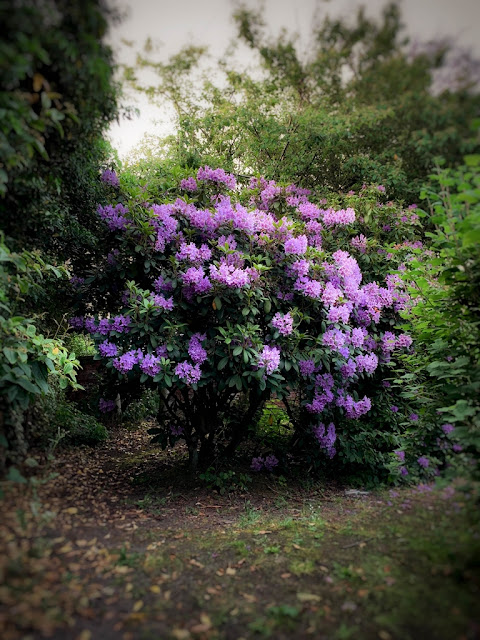 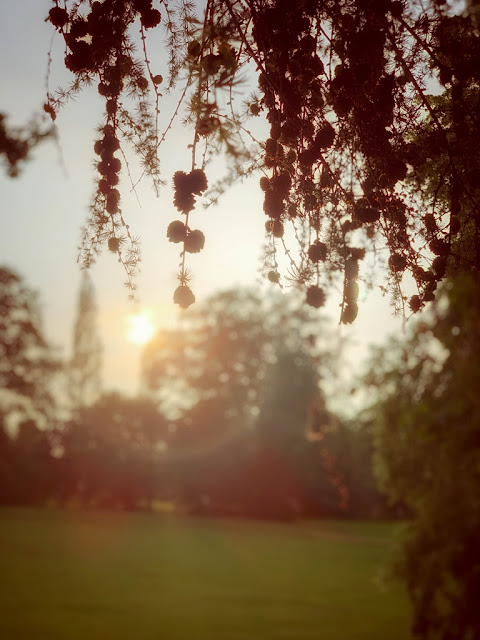 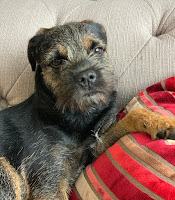 Posted by Vesna Armstrong at 02:09 No comments:

Last Saturday, during our visit to G's parents in Newark, Nottinghamshire, we all went to the alpaca farm at the JandJ Alpaca Centre & Coffee Shop near the village of Dry Doddington. It was fascinating to see so many beautiful alpacas in one place. When we arrived they were all rather far away in the field, but the owners soon put a bit of food in the troughs near the coffee shop to entice them over. We drank delicious coffee and watched the alpacas through the coffee shop window. I, of course, went outside to take photos, too. It's a lovely place where I could spend all day! 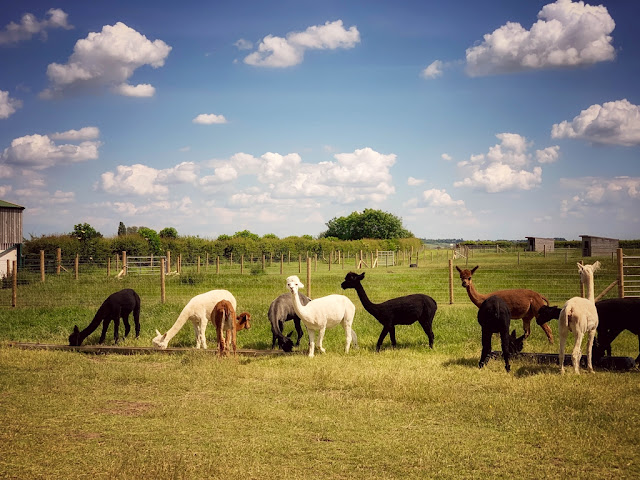 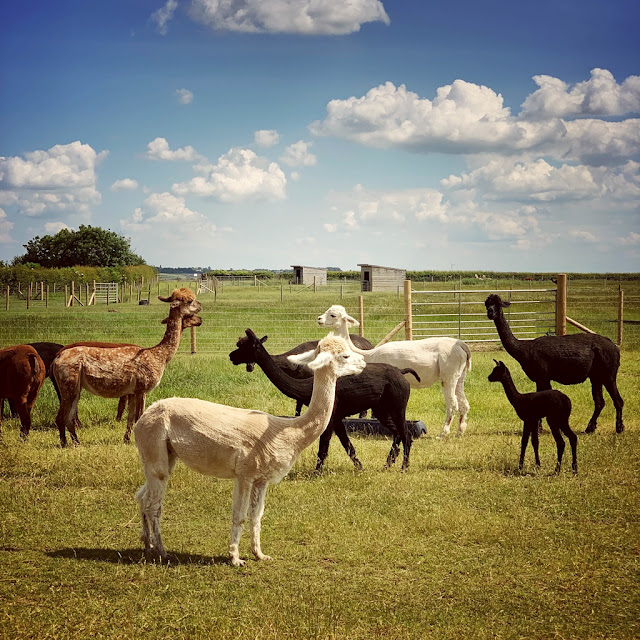 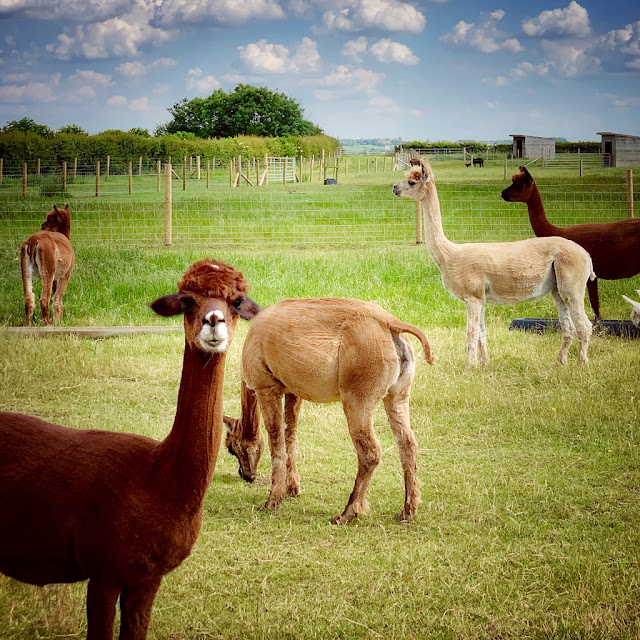 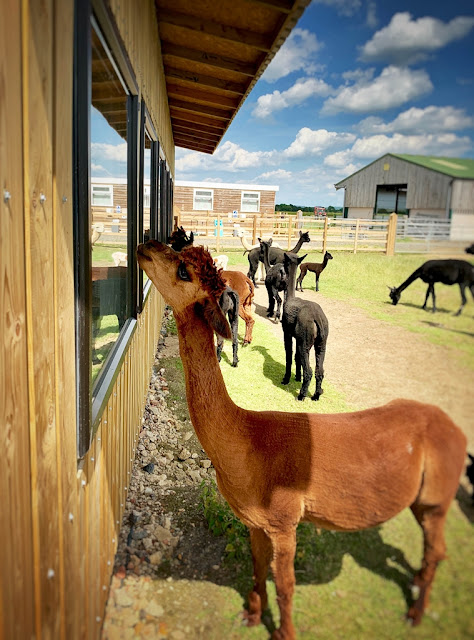 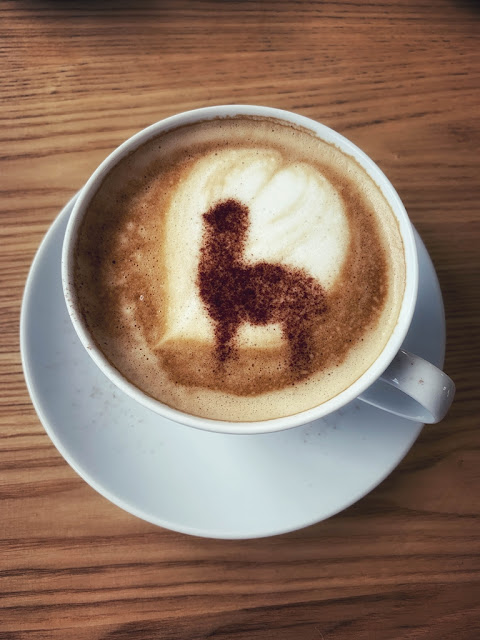 Posted by Vesna Armstrong at 02:03 No comments:

At the weekend we went to G's parents' house near Newark in Nottinghamshire. We love staying with them in their beautiful spacious house and always have a relaxing and most pleasant time. Now we have a puppy the visits are even more enjoyable; it feels like the puppy Midge has rounded off the homely family atmosphere. Fernwood, the village where my in-laws live, is a peaceful and quite pretty place with lots of trees and grass areas. It is very dog friendly and great for dog walks. I particularly like the large meadow and woodland area that stretches behind the houses on the road leading through the estate. Here are a couple of shots I took there walking our doggy at the golden hour before sunset. 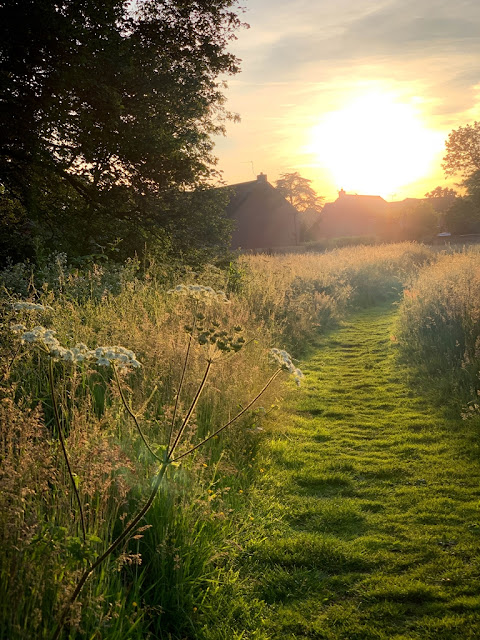 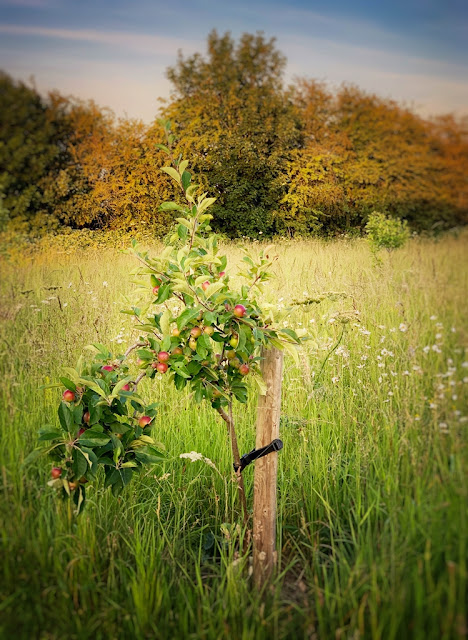 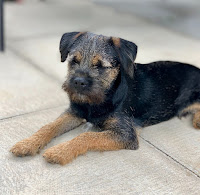 Posted by Vesna Armstrong at 04:32 No comments:

I absolutely adore poppies. The garish red splash of colour they produce in the month of June is a sheer delight. I have always fancied doing a poppy still  life, but here, in West Yorkshire, they are quite rare and chances of being in a position to pick them and take them home rather slim. To be fair, you can see quite a lot of this giant cultivated variety in private and public gardens, but it is the wild poppy species that I really like.
Thanks to my dog walking (my dog, really) I came across a clusters of crimson red poppies around the entrance to a local field. They seemed to have sprung there overnight. I picked one stem on the way back home and put it in a small vase. The stem had just one flower open and a few furry buds. The next day another flower unfurled from one of the buds, its delicate papery look petals forming a full circle while the older flower petals curled backwards. I had to capture this stunning ethereal beauty with a camera as soon as possible as I didn't know how long these gorgeous flowers last cut. The stem was long and flower heads facing upwards, so I chose a  point of view from above. I placed my pale green tablecloth on the floor near the dining room window and the vase with the poppies on top of it, and took a few shots with my iPhone. 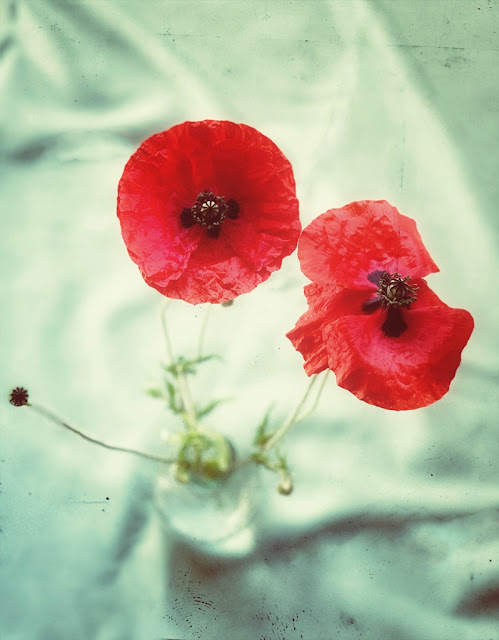 I cropped the image a little and processed it using the Retrolux tool in Snapseed. The whole process from setting up the shot to editing it took just twenty minutes. A very quick creation, considering that not that long ago I'd spend hours creating a still life image. This is one of the joys and advantages of iPhoneography over conventional photography - you can work much faster with the results being just as good if not even better sometimes......

Posted by Vesna Armstrong at 23:53 No comments:

After an emotional reunion with our puppy Midge who we lost briefly, G and I went for a happy walk with him as a family to our favourite place and future home, Haworth, Brontë Country. We chose the beautiful Sladen Valley for that occasion, for a change from the usual Haworth moorland walks. It was an overcast day with just a hint of sunshine here and there, rainy sky threatening most of the time. However, the weather was kind to us and it stayed dry. 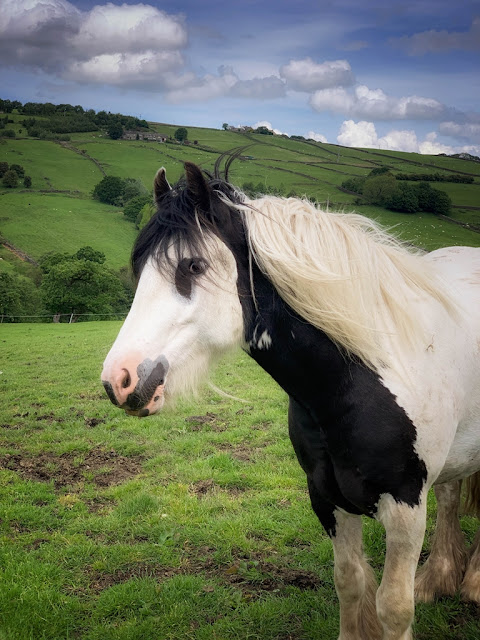 I think I'm finally getting somewhere with my processing. For quite a while now I have been dissatisfied with the final appearance of my images: I got bored with that neat, "perfect" look and felt it didn't do justice conveying how I felt about the subject of my images. I wanted to achieve a bolder, moodier and darker style; I've had quite a clear notion in my mind of what I was looking for and I bought/installed quite a few iPhone photo editing apps searching for filters and presets that would help me achieve that look. Nothing grabbed me! On the contrary, there was very little I'd want to use at all. Then, on sheer impulse I paid a closer attention to what Snapseed has to offer. Snapseed is the very first app I installed; it is free and is one of the most popular and widely used photo editing apps out there. I realized it does have a good potential to help me develop the desired editing style. The main Snapseed tools I used for the above images are Vintage and Glamour  Glow. I feel quite relieved, happy and newly inspired now I've found myself on the right track for my postprocessing. 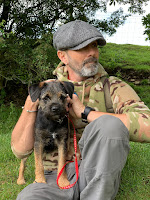 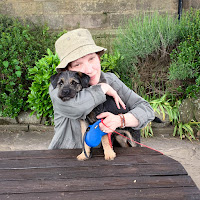 Since I bought my iPhone back n January and particularly since we got our dog in February I found myself taking a lot more photos than before. I am so happy about the new creative energy and inspiration, but I have ended up with a large backlog of photos waiting to be edited and shared and am constantly playing a catch up. I was even thinking of pausing in taking new photos, but that proved impossible. Today's post is another one that should have been done many weeks ago; back in April when I visited my beloved native city of Zagreb I also made a short trip to the beautiful region of Kordun in the central Croatia, near Bosnian border, where I have some lovely friends. It was a very pleasant day; dry but rather overcast and not too hot; perfect for an early spring stroll in a captivating countryside. I particularly loved the lacey look of white blossom trees strewn all over the landscape. 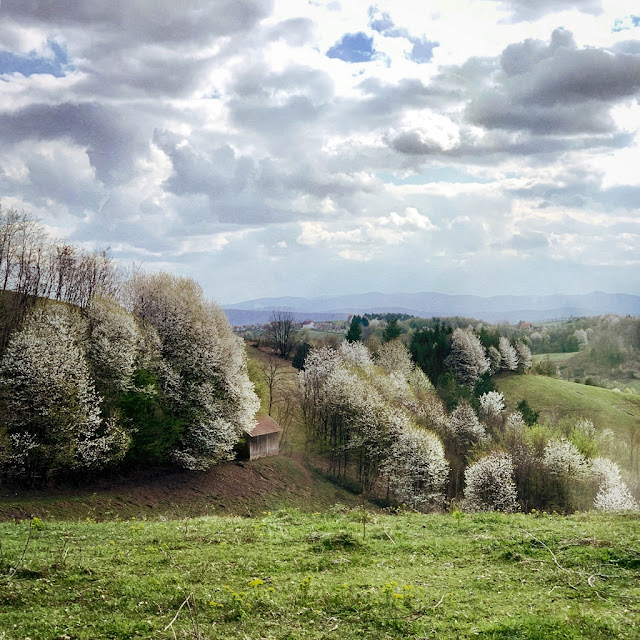 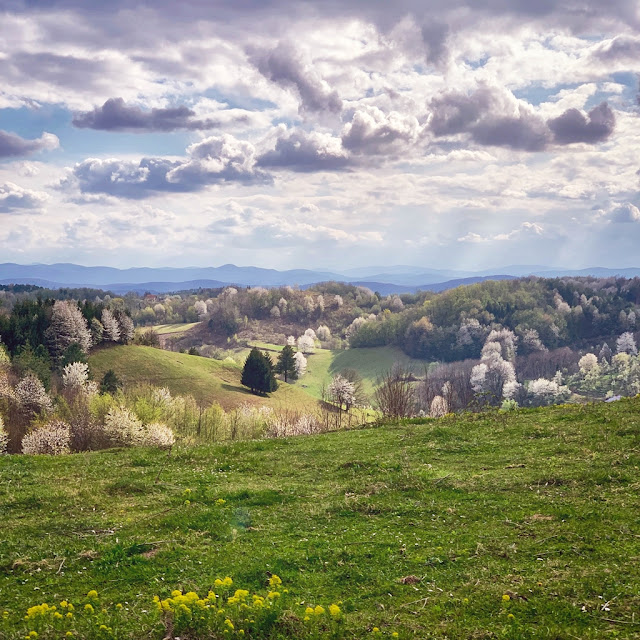 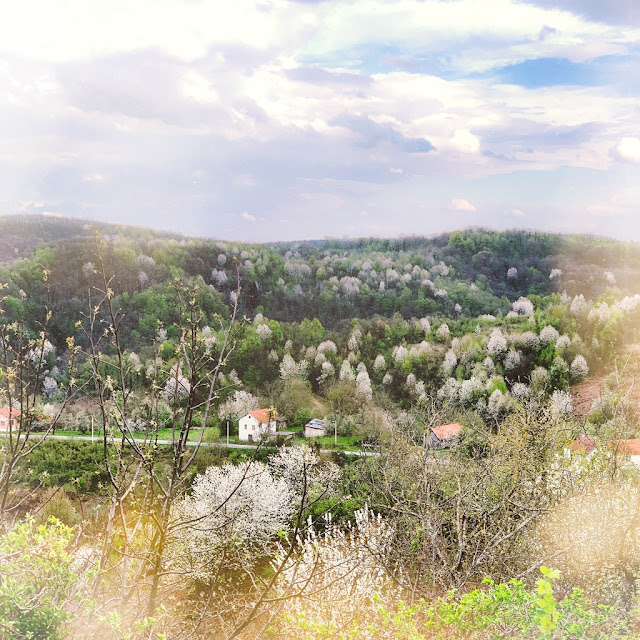 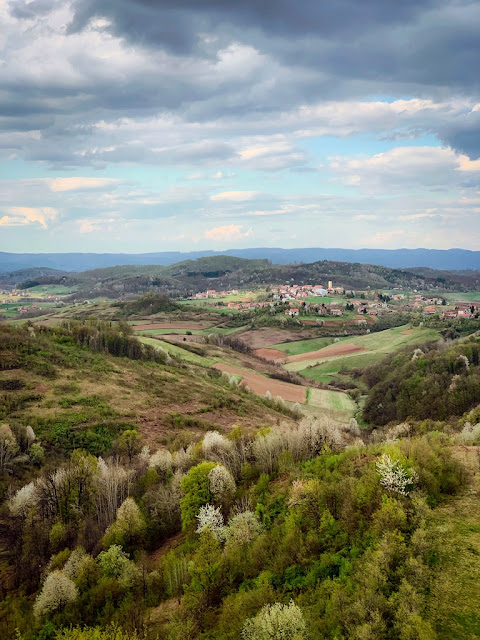 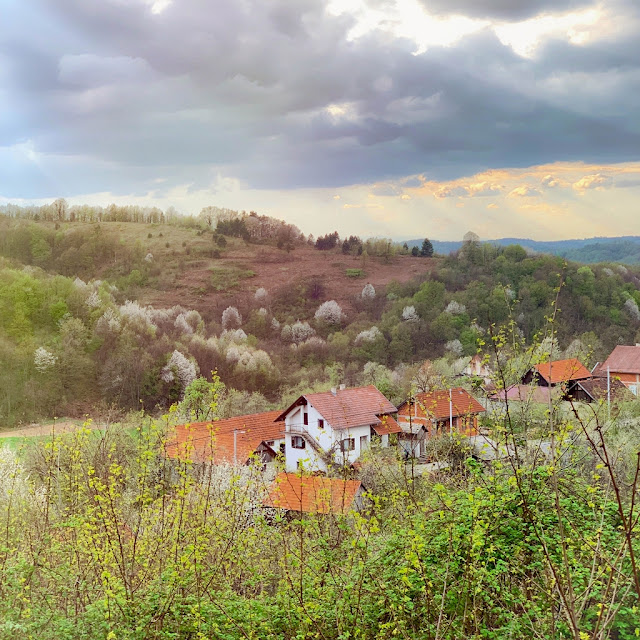 Yesterday I thought I was never going to write another post under the title "Walks With My Dog", and that the series was about to come to an abrupt and painful end. Yesterday my world collapsed when our puppy Midge went missing after running away with the lead still attached to his collar. We kept scouring the woods and the area around the house and further afield, but Midge was nowhere to be found. The void in our hearts and our home and the prospect of a life without him were unbearable throughout the afternoon and the night. Then G got up at the crack of dawn and was back out looking for the puppy. Not for long: thankfully he found him on the path in the woods very close to our house.
So I dedicate this post to the reunion with our precious puppy. With this post I want to celebrate the good fortune we have had in finding him safe and sound, and the relief of our lives being restored to how they used to be just a couple of days before. 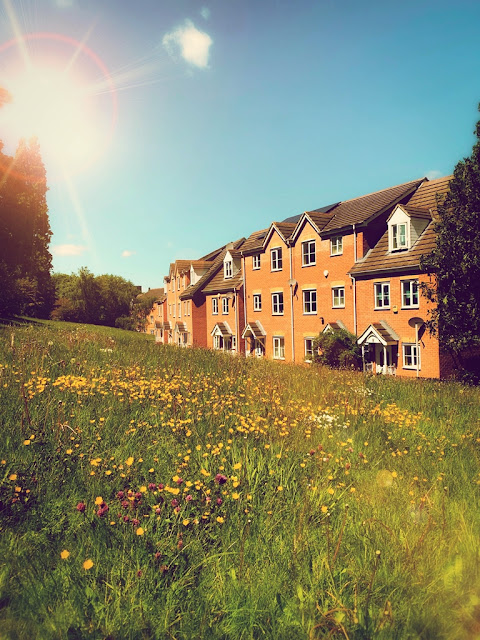 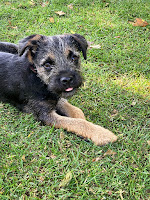 Posted by Vesna Armstrong at 11:50 No comments:

Back in March the 20th my long planned visit to Elizabeth Gaskell's house finally happened to my immense excitement. It was one of my pilgrimages in the footsteps of the Brontës, Elizabeth Gaskell being Charlotte Brontë's first biographer and the only one who actually knew her; Charlotte and Elizabeth were friends for the last five years of Charlotte's life, and Charlotte visited her friend in her Manchester home three times, in 1851, 1853 and 1854.
The house is presented as it was at the time the Gaskells lived there. There aren't many furnishings that belonged to the family, but all the furniture is from that period.


Upstairs, the bedrooms have not been recreated, but the space is used for an extensive exhibition on the Gaskells' servants - accounts of their life and a display of tools and utensils used by them. The family had five servants including Elizabeth's lady's maid Ann Hearn, who was also a friend and a vital family member.
In the basement there is an inviting tearoom in what used to be the kitchen. After a refreshing cup of coffee I was ready to leave this beautiful and inspiring house.
However, there was another place in Manchester I wanted to see on the day; another Brontë landmark, only a short walk away.


It was now a rush hour and I didn't want the mundane hubbub of a big city to spoil the spirited mood inside me; I opted for the quickest and mentally least disruptive way of getting back to the station - a taxi ride. Once on the train I closed my eyes and fondly ran through in my mind all the beautiful, memorable moments of the wonderful day I had just had.


Posted by Vesna Armstrong at 05:29 No comments: