As I mentioned in a previous post, I've been looking forward to creating a seasonal still life image with summer fruits, and here it is finally - somewhat late in the season I suspect.
This time I didn't really have an idea of the composition for my image, all I knew was that it was to contain as much summer fruit as possible, and it was going to be about the abundance of summer and its explosion of vivid colours.
I went out and spent a lot of money buying different fruits. It proved really hard coming up with a balanced and pleasing composition with so much fruit, and I ended up not using all of it, and not all of the kinds I bought. I didn't use the cherries (they were too dark) and the slice of melon (just couldn't fit it in). I thought yet again of the saying "the simpler the better" and how true it is. After what felt like hours of arranging and rearranging the fruit I decided to use two round dishes and arrange the fruit in two circles - berries on top and other fruit on bottom.
In the postprocessing I began to create my usual dark(ish), rustic, country look. Then, suddenly I wasn't happy; it wasn't what I really wanted; it didn't look summery enough. I felt an urge to create a light, high key, ethereal image that would shout summer at the viewer, so I set out to work from scratch again and ended up with the image below. 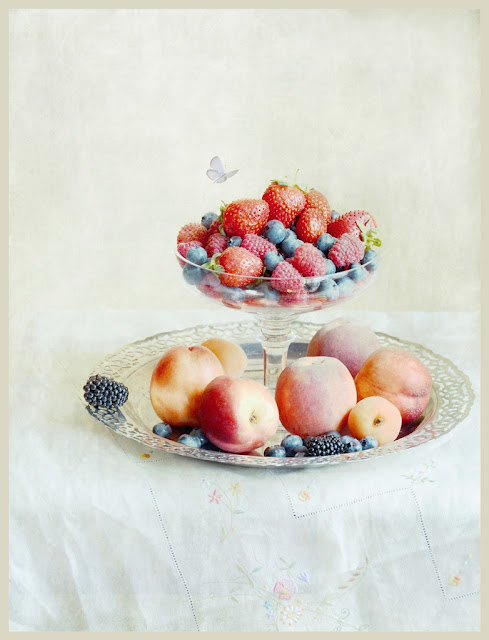 I asked G to tell me which version he preferred and after a brief hesitation he said "definitely the darker one". I felt disappointed for a moment, but when I looked at my original version again I began to understand why he liked it better. After all, it has a more natural look, the colours are lot better presented, and it is the style of editing that comes naturally from me. 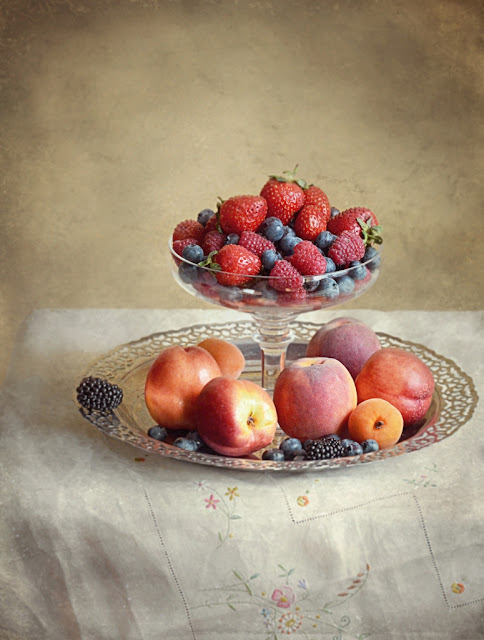 However, I still like the high key image. I like it because I managed to produce something different which perhaps is not as good as my usual work, but I believe is interesting nevertheless. I've decided to keep and share both versions alongside each other, and am very much curious to know which one people prefer in general.


Posted by Vesna Armstrong at 02:51 No comments:

Images Inspired By a Holiday Cottage

When we were on holiday in The Lake District the other week we stayed in the lovely Primrose Cottage in Hawkshead. It is a pretty, very comfortable and well equipped cottage, dog friendly,  reasonably priced and situated just yards from the heart of the village.
I regret not having taken more photos of this cottage, but there is always a next time. 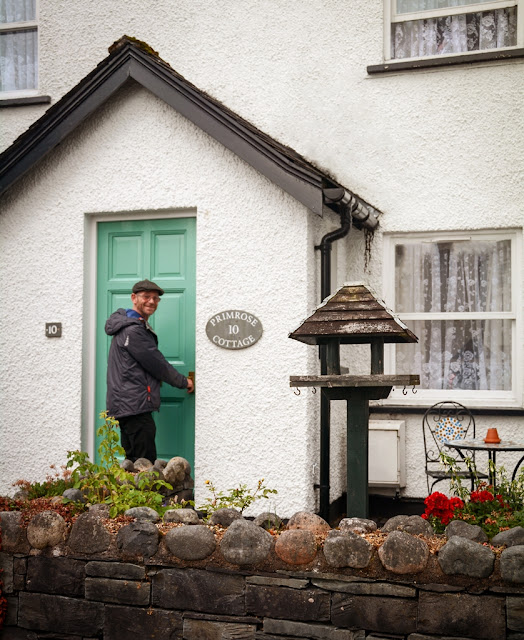 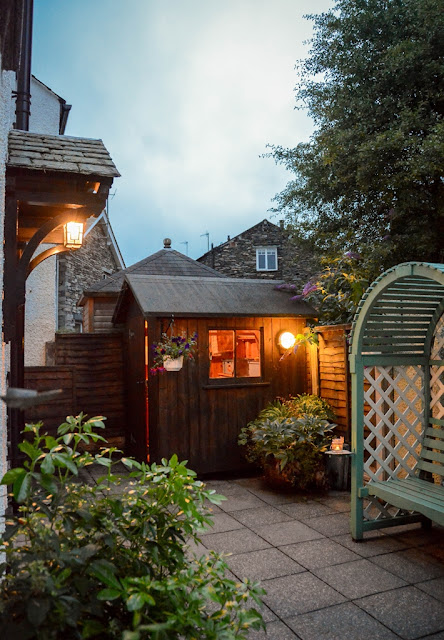 Posted by Vesna Armstrong at 02:56 No comments:

Walking around Hawkshead and Grasmere, The Lake District

The other week we holidayed in our favourite Lake District haunt Hawkshead with our besties Dave and Liz. We love not only the storybook look of the village, but also the tame countryside around it, and the fact it is close to some other lakeland places we love, such as Grasmere. The weather was not very good; it rained a lot every day, and there was no great light for my photography. But, one thing that is always there in the Lake District to capture by a photographer is the unique atmosphere and mood the mountains surrounding the lakes create, so that is what I endeavoured to do.

Sunday, the first full day of our holiday it rained non-stop all day. We decided visiting Brantwood, John Ruskin's house at nearby Coniston would be a good idea under the weather circumstances. The house itself was really beautiful and very interesting with lots to see and admire, but it was too wet to walk around the extensive gardens with beautiful views of Coniston lake, even carrying an umbrella.

Monday it also rained till late afternoon, so we went to Keswick and Ambleside trailing around the shops and cafes. It was only on Tuesday that we finally had a chance to go for a much longed for walk. We walked to the pretty hamlet of Outgate, then on to Blelham Tarn and Wray Castle. After a quick coffee and snack at Wray Castle (which was crowded with kids enjoying school holidays) we walked back through fields passing a few charming lakeland farms. To the left there were views of Latterbarrow fell and behind us magnificent views over Blelham tarn, Windermere lake beyond and distant mountains. 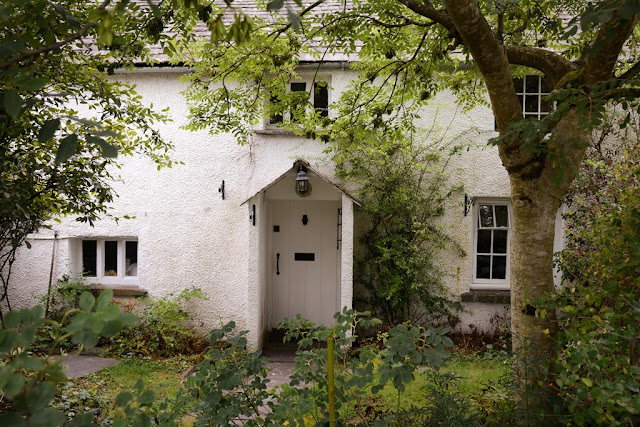 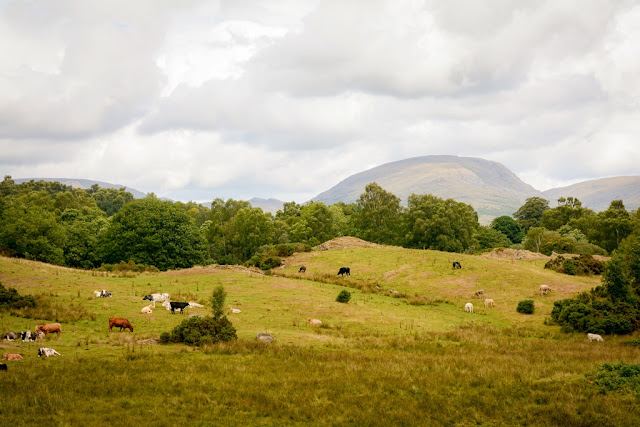 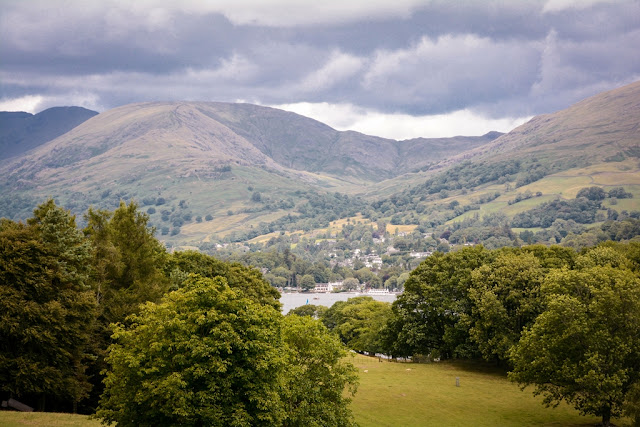 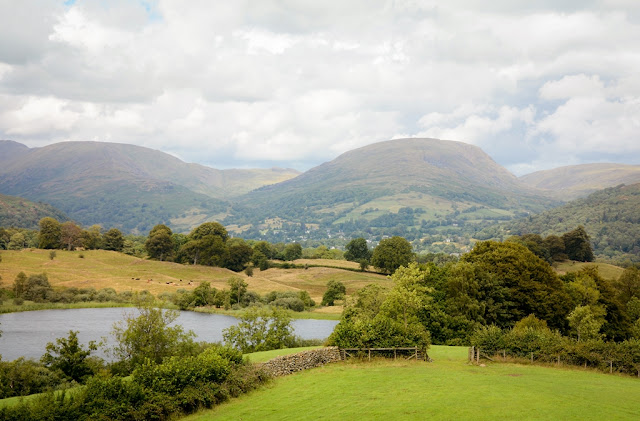 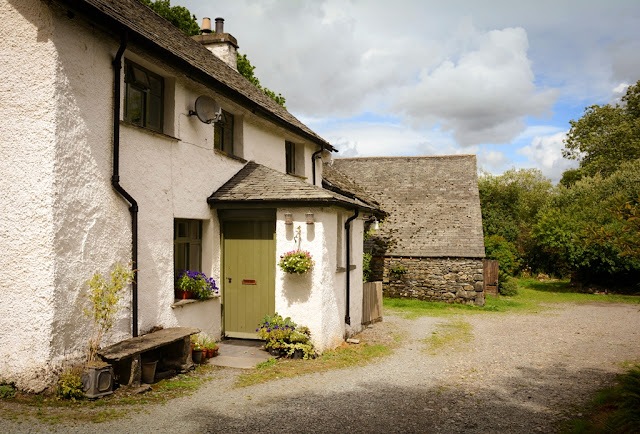 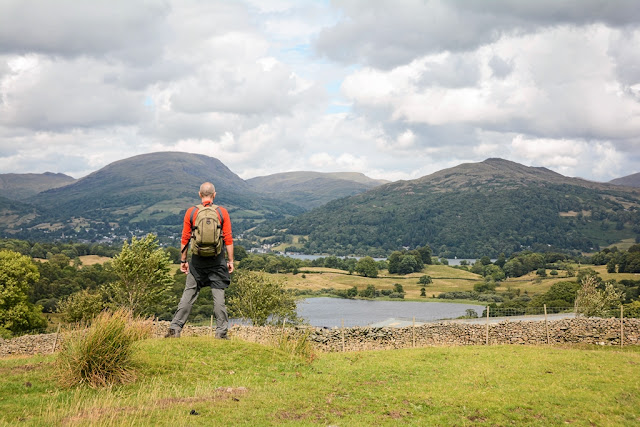 On Wednesday Liz and I separated from our men. The men went on a walk around Grizedale Forest, and us girlies visited Hill Top, Beatrix Potter's charming farmhouse and gardens which was followed by a walk around Esthwaite Water and Castle Woods. We loved it at Esthwaite Water, a peaceful, less known lake where we only met two people while there - a woman and her young son. There seemed a path all around the edge of water, and we decided to come back here on our future holiday and explore the lake more closely. Beatrix loved this lake lying on her doorstep and chose it as a setting for many of her children's tales. 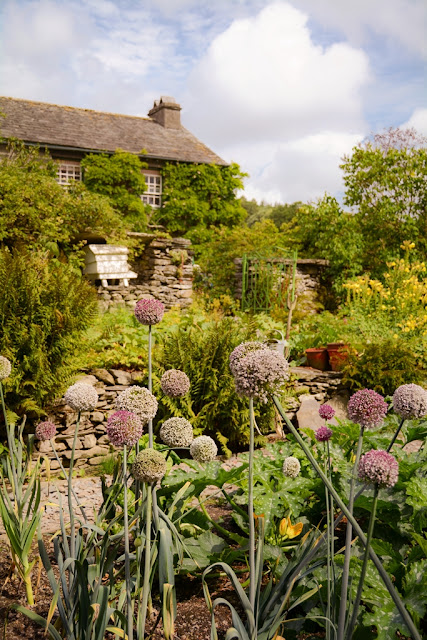 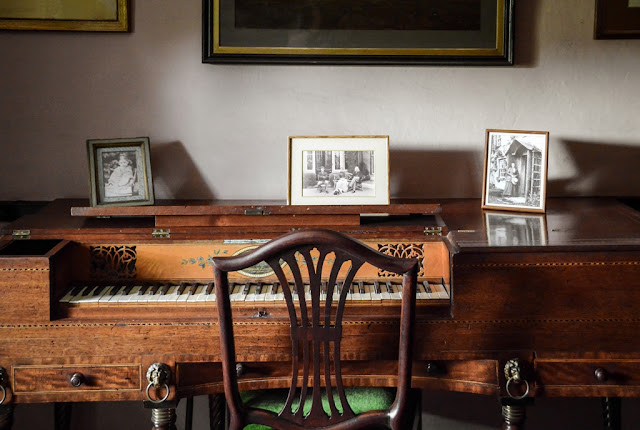 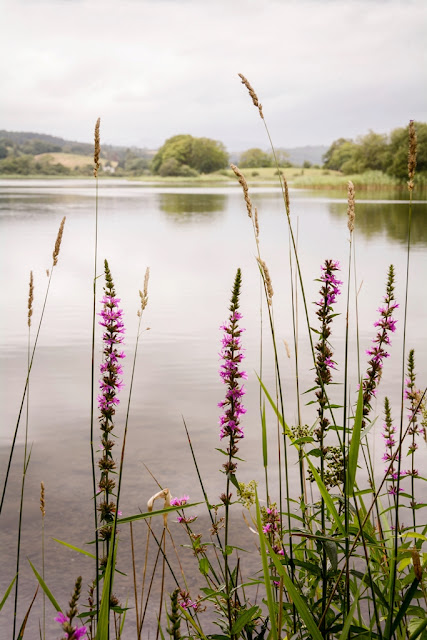 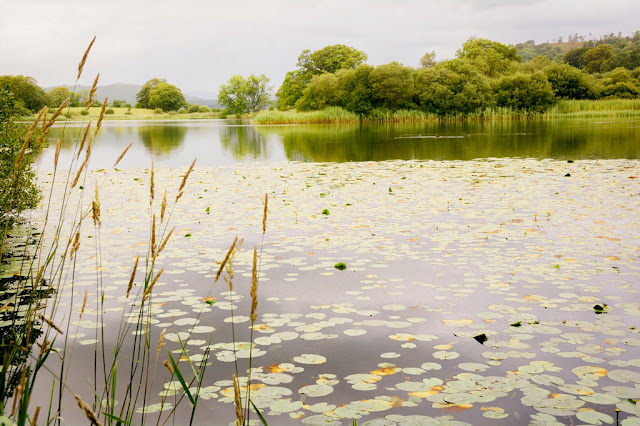 On Thursday there was more rain, especially in the morning. We drove to the Grasmere village, which we all love and stayed at in the past, and sat down in a cafe sipping coffee while waiting for the rain to stop. When it finally happened we set off for a stroll around the village. We left the village joining a steadily rising path with excellent, moody views to Helm Crag. Rainy clouds hung down very low.... 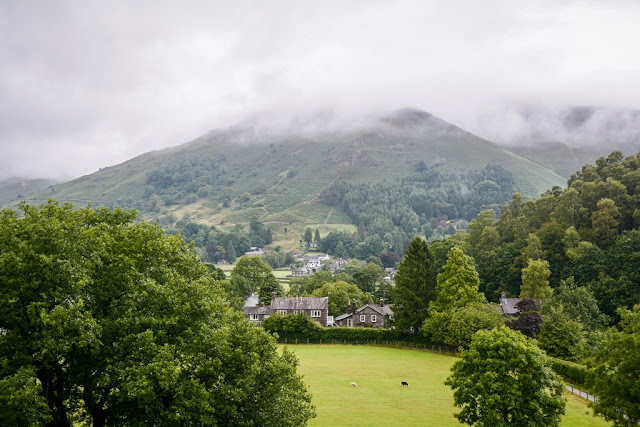 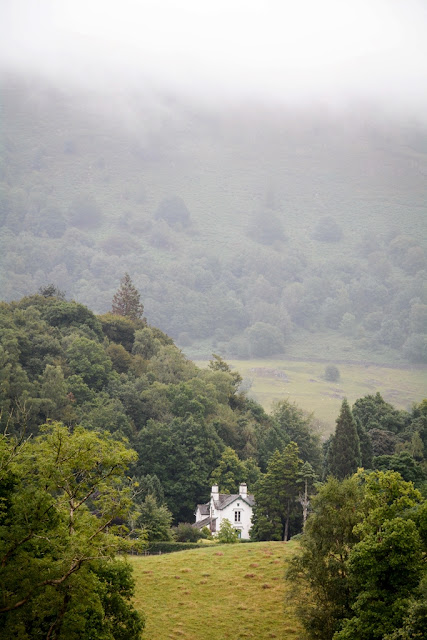 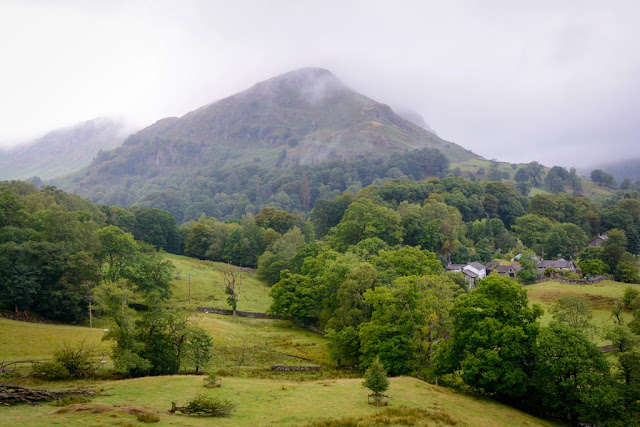 We reached Allan Bank, a lovely villa on high ground, the property of National Trust. Poet William Wordsworth moved in here when Dove Cottage on the other side of Grasmere became too small for his growing family. Liz and I went in to have a look around. It was teeming with children engaged in various craft activities and games. The best thing for me were the stunning views out of the large Georgian windows that enabled me to take some of my favourite photos of the holiday. 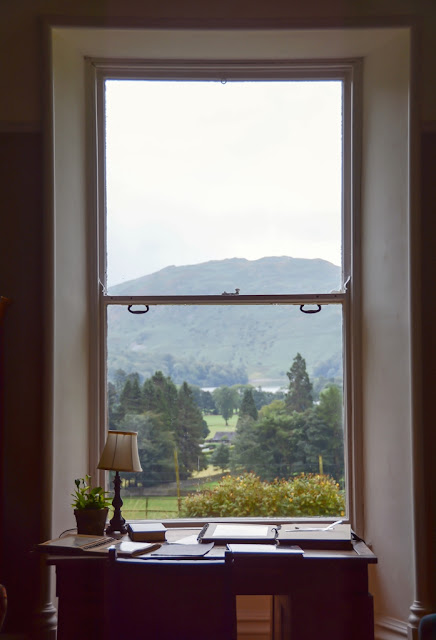 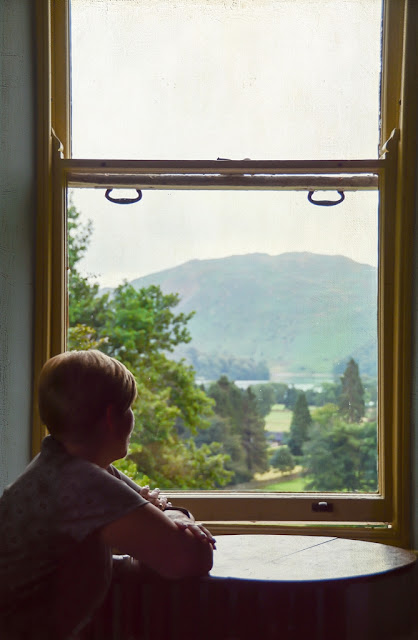 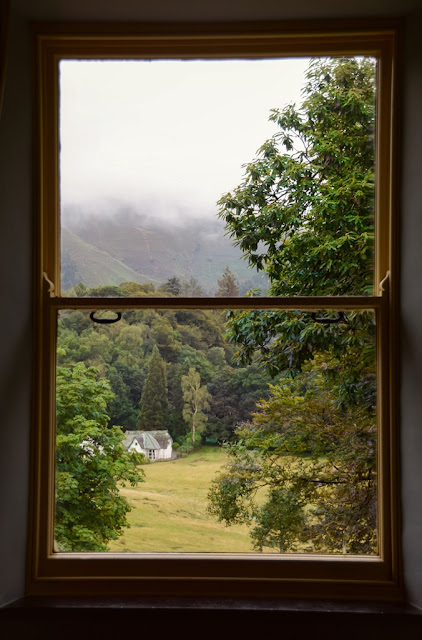 It has been a while since I played with texture layers in my scenery photography, and this particular photo with its winding path, unusual perspective and composition was shouting at me to have a go. I must admit I am unlikely to ever outgrow the painterly, watercolour-ish look the use of textures gives to your photographs in postprocessing. 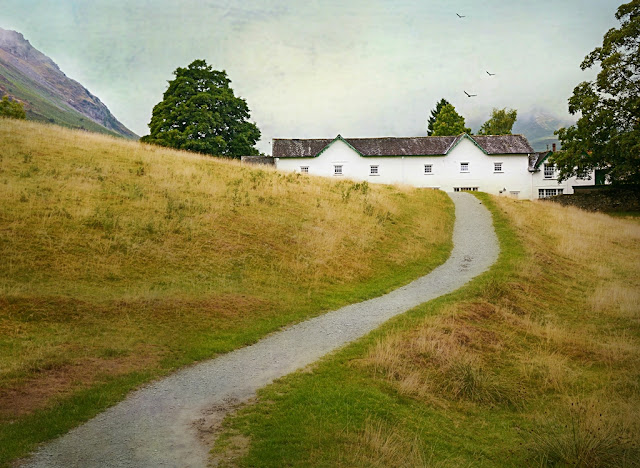 On Friday it rained yet again and there was no forecast of it relenting, so we just had a relaxing day mooching around the village, doing the last bit of shopping and starting to pack our suitcases.
I still have a few images I took around the lovely cottage we stayed in and will share them in my next post.

A Return to Hawkshead, The Lake District

Last week we went for our usual yearly week's holiday in the Lake District. Each year we go at a different time of year depending on when we can get the same time off work, and this year it happened in the middle of summer. We chose to stay in Hawkshead for a second time, a pretty village we both fell in love with for many reasons. We thought it was going to be crowded, but were relieved to find there wasn't too many people around despite peak season (more reason for us to love Hawkshead).
Unfortunately, we were not very lucky with the weather: it rained every day at least half the day and we hardly saw any sunshine. The village was wet, but still beautiful and cheery with lots of lush green plants laden with gorgeous summer blooms and colourful flower baskets dotted around whitewashed houses.


More about Hawkshead can be seen in my last year's post here.