Skalinska Street is one of my favourite Zagreb Upper Town streets. It is situated at the bottom of the old town (called Upper Town), near the main square. It is very short and spans the wonderful Tkalciceva Street (at the bottom of the first photo) and Opatovina, the street of much personal significance for me. Every time I am in Zagreb I have to have at least one meal in Skalinska St., in the Nokturno - restaurant and hotel, and this year I dined there with my lovely photographer friend Jasenka. The restaurant boasts a surprisingly extensive Mediterranean menu at low prices and the food is very nice. The street is very photogenic with its old architecture and quaint look, and if you stand at the bottom of it you even get a good view of the Zagreb cathedral.
I really like the light on the first photo, but for some strange reason I could not get the photo to look here on Google Blogger the way I intended it to look. It should be viewed on my Flickr account here: http://www.flickr.com/photos/vessimages/10003852164/

The Cottage in September

I did not have a happy day at work yesterday so on my way back I stopped at the little cottage at the cemetery to relax and take a few shots to cheer myself up. Signs of early autumn were all around and beautiful colours very pleasing for the eye. I have previously posted a spring image of this cottage here http://vesnaarmstrong.blogspot.co.uk/2013/04/dreamy-spring-afternoon.html 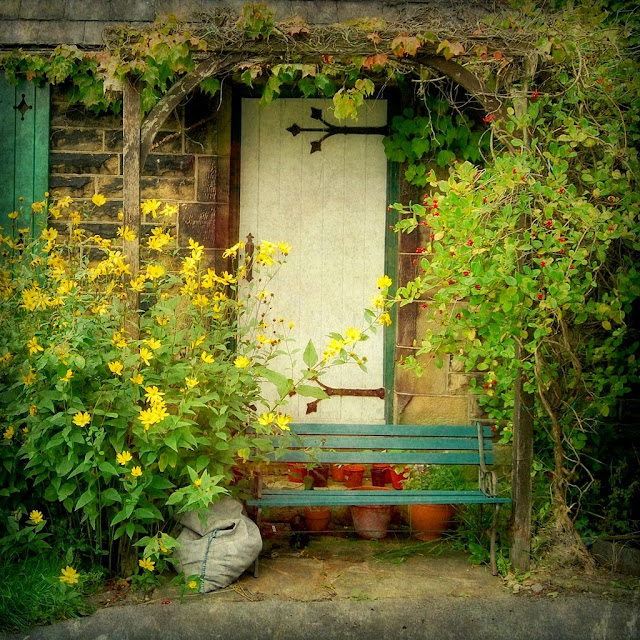 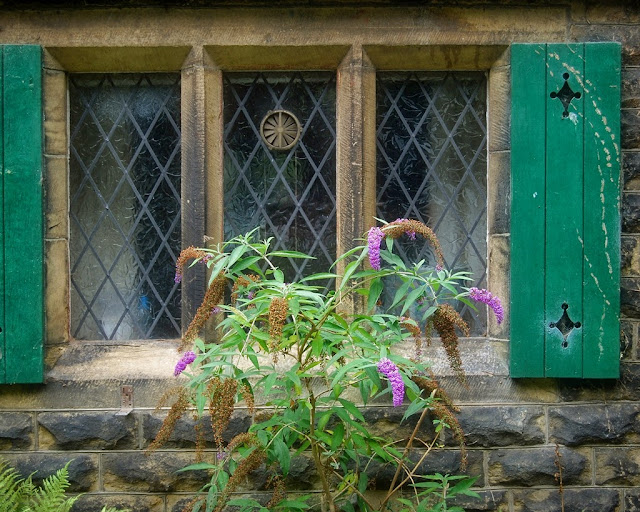 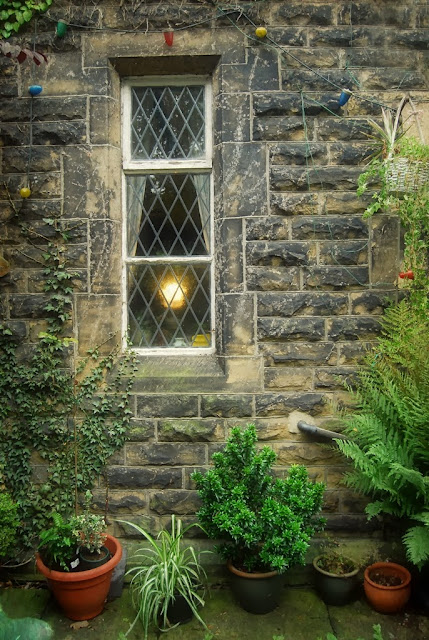 My Bedroom at Mum's in Zagreb

A modest but cosy little bedroom in my Mum's upstairs flat. The flat is usually rented out but was vacant this summer so I had a chance to have it for myself. I love the big window overlooking a park. I left it open at night to breath in the fresh air scented by the grass, various shrubs and trees growing in the park. On the table there is my diary which I kept assiduously every night before switching off the light.

This is my Mum's young tomcat, called Miki. He is not allowed in my Mum's bedroom downstairs at all never mind on her bed. But me being a sucker for cats I let him go wherever he wanted to go in the upstairs flat (except tables that is!). He took every opportunity to snuggle up on my bed and spent as long there sleeping as he could. 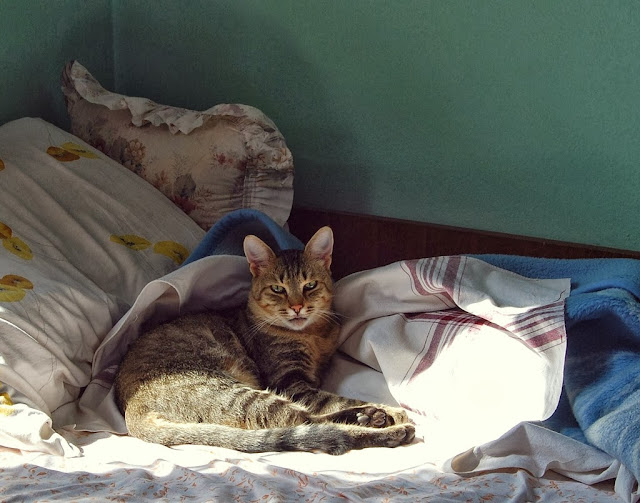 I just got back from Zagreb, my beloved and beautiful hometown. I am not the sort of photographer who takes thousands of pictures but I did take enough to make it difficult to decided which ones to edit and share first. The easiest choice was my favourite of all, the one of a girl with a red umbrella wearing a national costume selling postcards and souvenirs on a popular old town street. To make it a theme I have added two other images of women doing the same just around the corner.

I have always been attracted to this street corner with its old lantern and four windows in the background and have taken many pictures there. But this time I was treated to this girl wearing ethnic clothes and standing just in the perfect place. She saw me and kept turning around thinking I wanted a picture of her facing the camera, but I really wanted a full view of that lovely red umbrella. The umbrella and the costume are characteristic of Zagreb,  precisely of  Sestine, a village nestling at the foot of the mountain Medvednica. 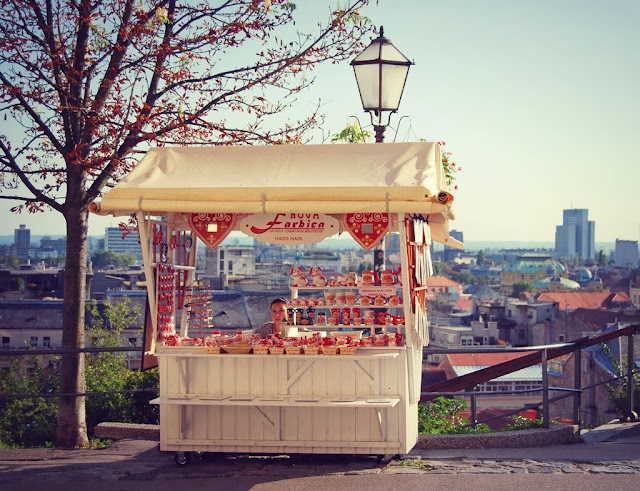 This stand was new to me, it was not there last year when I was in Zagreb. I thought it looked delightful with the tree to the left, the old street light behind it and the backdrop of a city view in the distance. I only managed one shot with the girl in the frame. Next she decided to hide her head behind the goods she was selling. 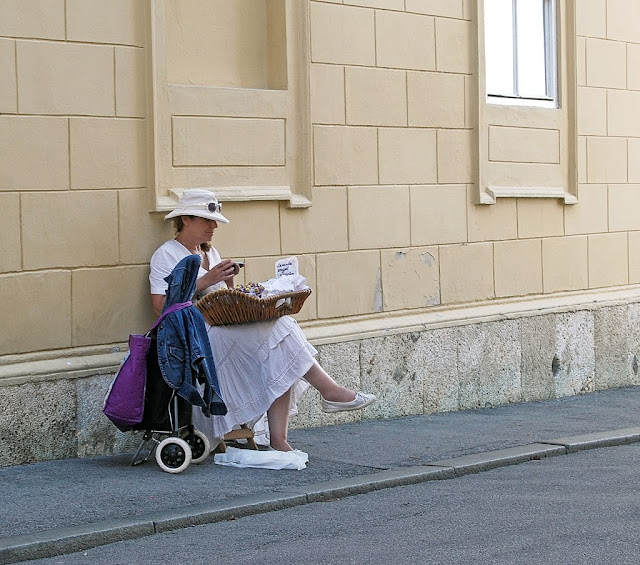 This woman attracted my attention just by sitting isolated against a wide wall. She looked unusual and mysterious in her white outfit selling little pouches of lavender with angel heads. Strangely, she seemed more interested in whatever she was doing on her mobile phone than in attracting customers.

It is nearly apples time, in fact, I have already seen some ripe ones that have fallen off a tree, so I decided to share this simple still life I took back in late June. It was really no more than an exercise testing my new 50mm f1.8 lens, but once I gave it a vintage look and put it in a ttv frame I quite liked it. 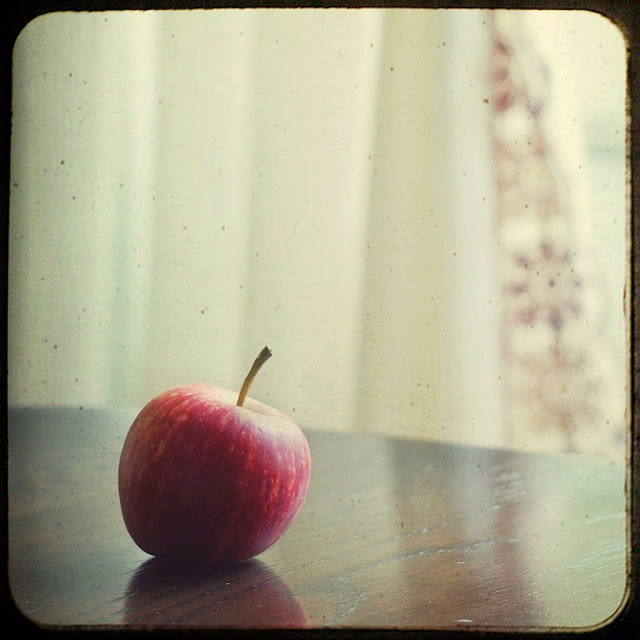