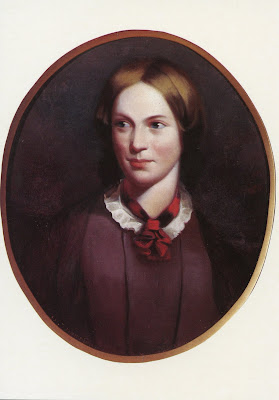 "The human heart has hidden
treasures, In secret kept, in
silence sealed; The thoughts, the
hopes, the dreams, the pleasures,
Whose charms were broken if
revealed."

2016 sees the 200th anniversary of Charlotte Bronte's birth (21st April), and as I am a huge fan there has never been a better time for me to create a personal tribute to her. Charlotte is one of the three famous Victorian literary sisters who continue to awe, intrigue and inspire me, both as artists and as women. I was very excited and somewhat daunted at the idea of creating a still life image in her honour. 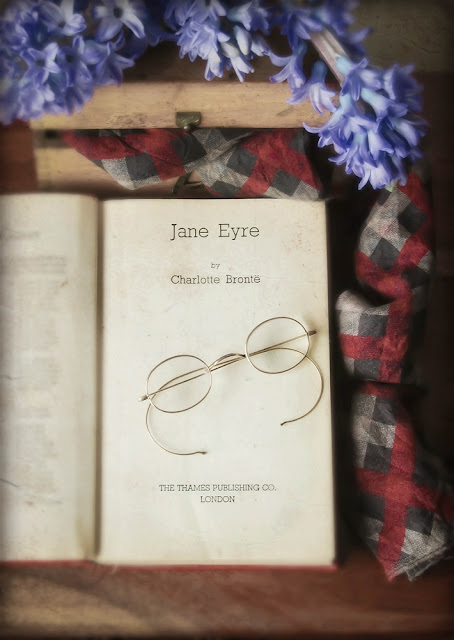 It did not take long for a picture to form in my mind, but I did not have the objects I needed to realize it. I wanted to use a "Jane Eyre" book but did not have an old publication. By some uncanny coincidence I stumbled upon one in a charity shop just days after I planned my image. The book is from about 1960 and has Charlotte's dedication to the novelist W. M. Thackeray, which she first inscribed in The Third Edition of Jane Eyre in 1848. It is not as old a book as I would have liked, so I added an old paper texture in post processing to create a more antiquated look.
Charlotte was very short-sighted, so I used an old pair of spectacles found in the Saltaire Vintage shop, that are not dissimilar to those she would have worn.
She was fond of wearing neck scarves which gave me an idea to included one of mine (for want of a more appropriate one) that reminds me of the scarf she is wearing in the above portrait by J. H. Thompson.
The presence of hyacinths is owed to the fact they blossom around the time Charlotte was born (and me too for that matter, two days after her); they are my favourite spring flowers, and in this image they represent my birthday present to Charlotte.

Haworth village and Bronte Parsonage Museum, where Charlotte lived and wrote all her works, are hosting many interesting and fascinating events and talks to mark and celebrate the bicentenary of her birth throughout the year. I am so looking forward to attending, photographing and writing about as many as I can.


"True enthusiasm is a fine
feeling whose flash I admire
where-ever I see it."

Posted by Vesna Armstrong at 10:34