One afternoon, during my recent visit to my ailing Mum in Zagreb, I popped to town while she was having a physio therapy. I thought I'd take advantage of the time to capture with my camera some of the lovely winter atmosphere in my native town. I had previously been reminded of Rokov perivoj (Roko's Park) through the Zdenko's Corner blog that I follow and love. I think even though I knew about the park, I had never actually been to it. It seemed like a perfect place for me to go to on that cold, but sunny winter afternoon, so I did.

The park is situated in the heart of the city, but it is hidden high up on a hill, above the busy Britanski trg (British Square), and it can be reached either by a steep climb from the square, or by a long flight of stairs on the opposite side. It is a peaceful and serene place, ideal for a gentle stroll, a quiet, reflective rest, or simply for drawing inspiration from. 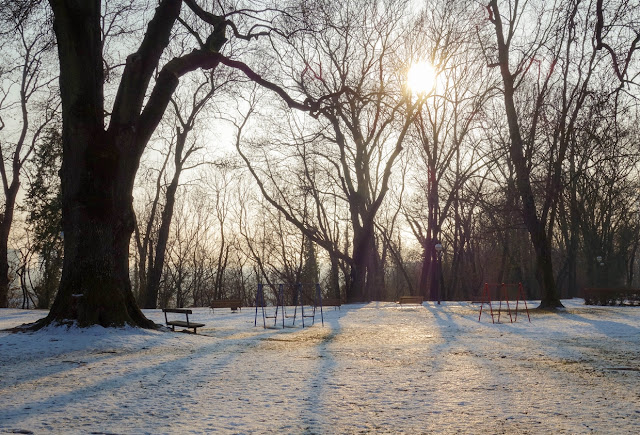 On this particular winter day the grass and paths were all blanketed in snow from a few days ago. Owing to freezing temperatures the snow never got a chance to melt; on the contrary it turned into icy stuff that crunches under your feet and gleams in the winter sunlight. 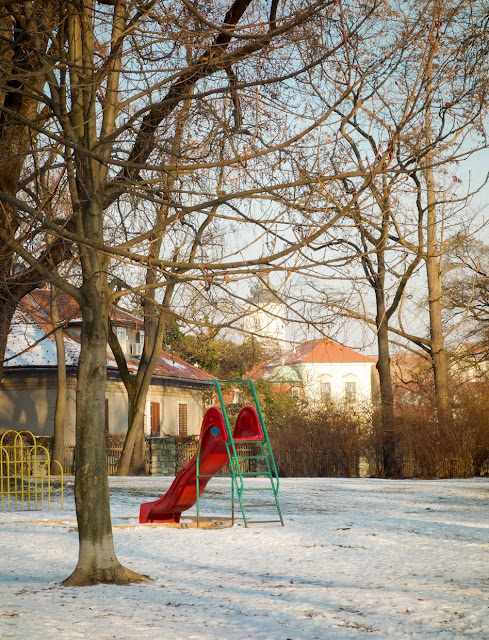 Childrens' playground features made for a striking, wistful detail in their snowy surroundings. I liked how the red slide stood out in the pale winter scene. 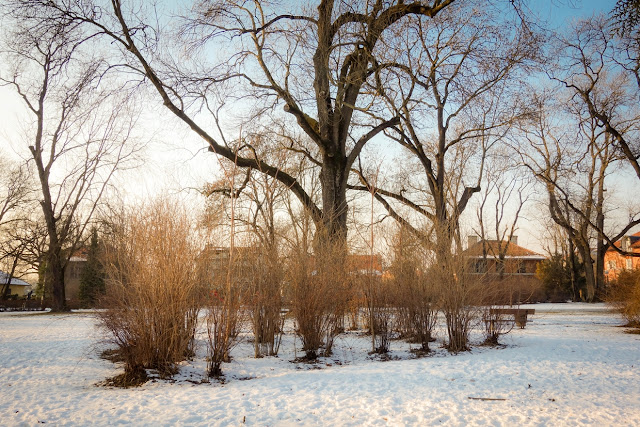 Until 20th century Rokov perivoj was a rural, farming suburb. With the industrial age and birth of aristocracy there was a growing interest in prestigious housing. In 1909, Viktor Kovacic, one of the most renowned architects of the time, was commissioned to design an affluent residential area at Rokov Perivoj preserving green spaces through urban landscaping. A number of villas were built and given to some of the most acclaimed artists, who in return donated their work to the city. Robert Franges-Mihanovic, a celebrated Croatian sculptor lived here, as well as painters Robert Auer and Jozo Kljakovic, to name just a few. 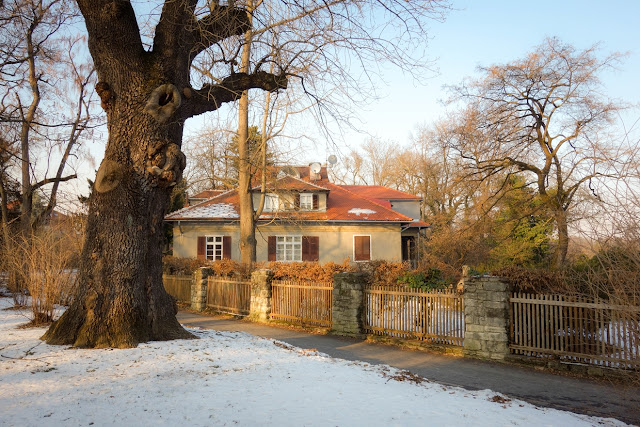 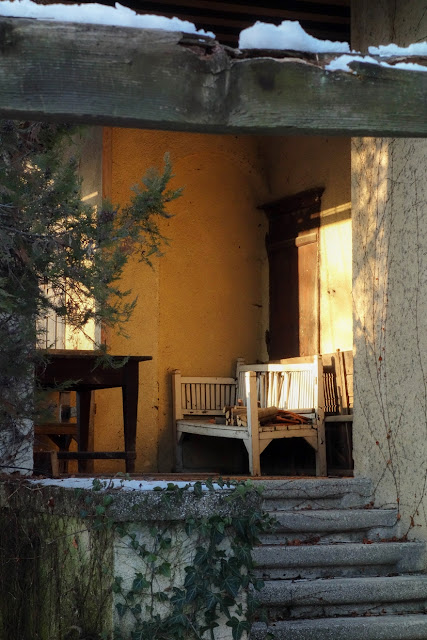 A close up of a detail from another villa. 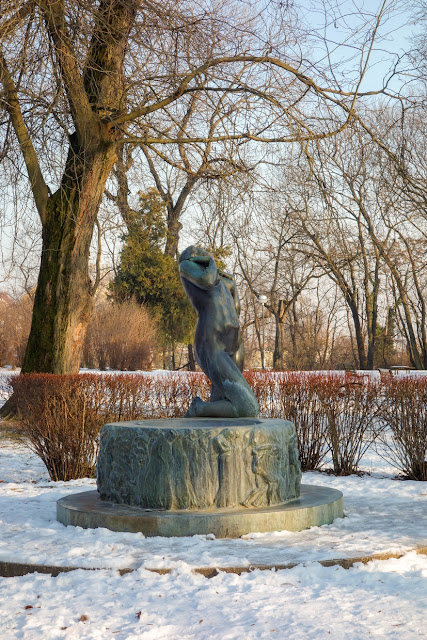 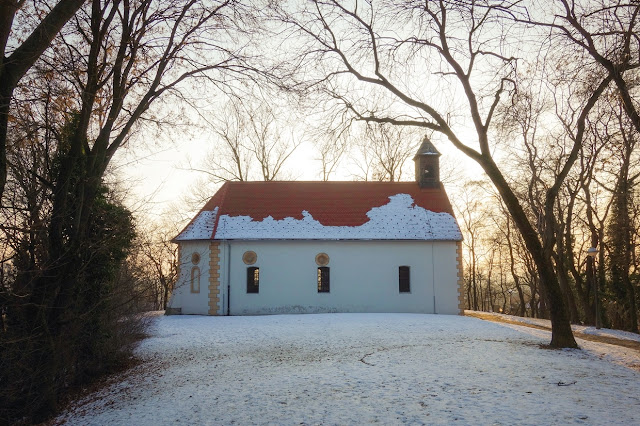 St Roko's Chapel, a charming, recently renovated chapel which was built in the17th century as an act of gratitude on the part of those who survived a devastating plague. I really like the backlighting here and the pattern of the remaining snow on the roof. 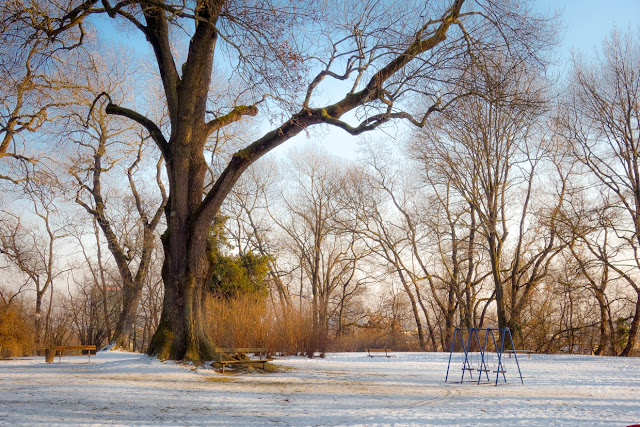 An interesting point in the history of the park is that it used to be a cemetery. The cemetery was closed and exhumed in 1877 when the famed Mirogoj became the city's main burial ground. 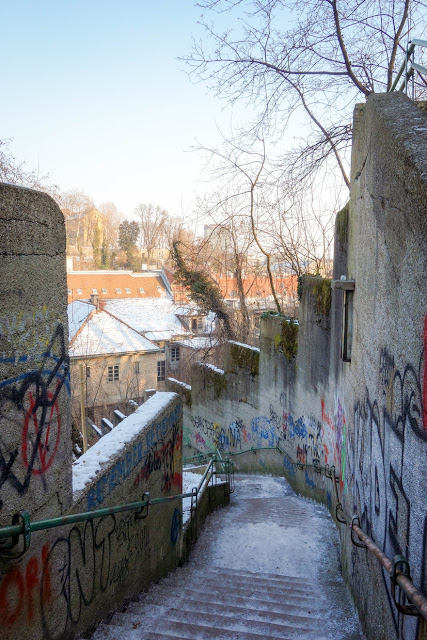 Attractive Aleksandrove stube (Alexandar's Stairway), built in 1935. The stairs connect the park to the city centre from its eastern side. Whilst I am open-minded towards graffiti art, I am not a fan of random graffiti scribblings; sadly, a lot of people in Zagreb must be as the old custom of putting graffiti on Zagreb's walls seems to be impossible to eradicate. I think it's a shame that these people are not sensitive to the aesthetic appearance of their own city.

Anyway, I was so pleased I'd paid a visit to the beautiful, idyllic Rokov perivoj, and am looking forward to returning at a different time of the year to see how it gets transformed by seasons. It may even become my little haven when I need a quick respite and a bit of peace and solitude when I am in Zagreb.

Posted by Vesna Armstrong at 09:41